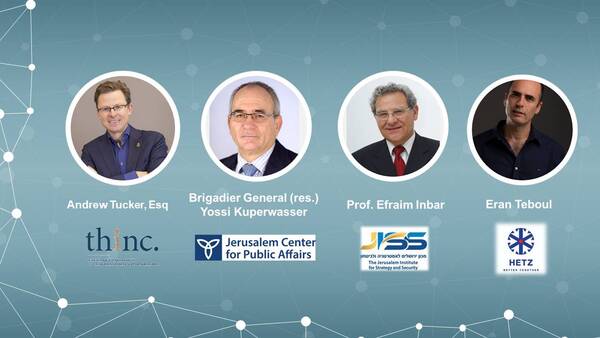 Meet our experts for a fascinating discussion on the necessities and possible implications of extending Israeli law into the Jordan valley, Judea and Samaria. Everything you need to know, brought to you live by the best.

Prof. Efraim Inbar is President of the Jerusalem Institute for Strategic Studies. He was Professor in Political Studies at Bar-Ilan University and the founding Director of the Begin-Sadat (BESA) Center for Strategic Studies. Inbar’s area of specialization is Middle Eastern strategic issues with a special interest in the politics and strategy of Israeli national security. He has written five books and over 100 scholarly articles. Inbar holds a M.A and a Ph.D. from the University of Chicago, after finishing undergraduate studies in Political Science and English Literature at the Hebrew University in Jerusalem. He served as visiting professor at Johns Hopkins University,

Georgetown University, Boston University, as visiting scholar at the Woodrow Wilson International Center for Scholars, and the (London) International Institute for Strategic Studies. A paratrooper in the Israel Defense Forces (IDF), Professor Inbar later served on the IDF Academic Committee of the History Department. He also served as President of the Israel Association of International Studies.

Brigadier General (res.) Yossi Kuperwasser is the senior manager of the project on regional affairs at the Jerusalem Center for Public Affairs. He was the chief intelligence officer of the IDF Central Command and the head of the research division of Israel’s Defence Intelligence Directorate between 2001 and 2006. Later he served as the  director general of the Israeli ministry of Strategic Affairs. Kuperwasser is an expert on Israel’s security issues and he regularly publishes articles on various media outlets and professional journals. He is also the head of the Institute for the Research of the Methodology of Intelligence at the Isreali Intelligence Community Commemoration Center.

Andrew Tucker is an Australian-born international lawyer based in The Netherlands. He is co-founder of The Hague Initiative for International Cooperation (thinc.). Thinc. promotes the fair and just application of international law to Israel, the Jewish people, and the Israel/Palestine conflict. Through research and publications, education, advice and the provision of information, thinc. assists politicians and policy-makers and others to make informed decisions on the fair and non-discriminatory application of international law to the Israel-Palestine conflict, and, in doing so, to promote the peaceful resolution of disputes based on UN Charter principles such as the sovereign equality of states, friendly relations between nations, and the Rule of Law.

Eran Teboul is the CEO and co-founder of Hetz, the initiative for creating an ecosystem for fighting Antisemitism and advocating for Israel. In his work, Eran is responsible for facilitating hundreds of collaborations between senior activists, executives, policymakers and more – every year. Prior to Hetz, Eran served as the CFO of HaShomer HaChadash Movement for 6 years. Eran is a certified CFO (BIU) and holds a BA in management (BGU) as an Erasmus Mundus fellow (UCM, Madrid), MA in Political Science with honors (BIU) and is currently conducting his PhD research on the Typologies of Boycotts (BIU). He served at the IDF’s Combat Intelligence Corps and is currently under active reserve service at an operational unit.