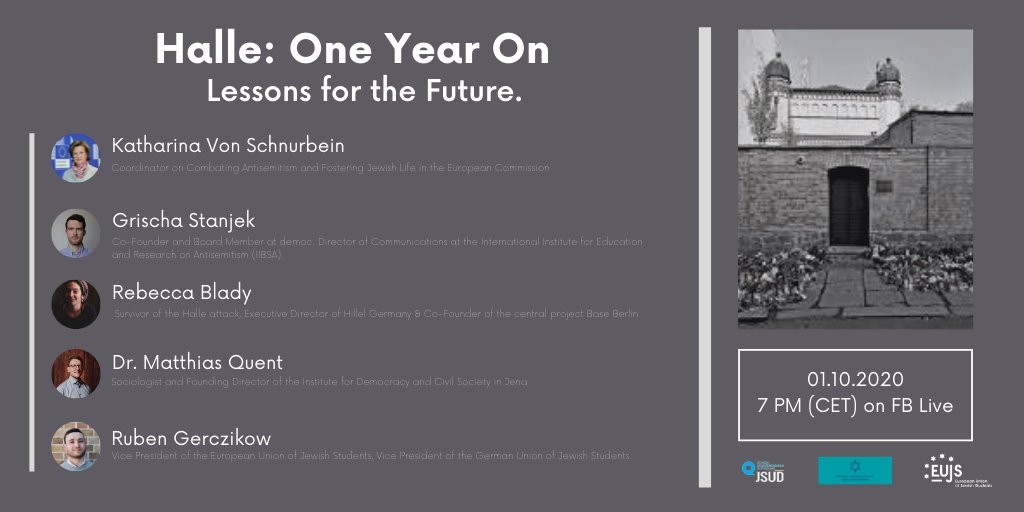 Halle: One year on. Lessons for the Future

On October 9th, 2019, during the Jewish holiday of Yom Kippur an armed far-right extremist attempted to enter a synagogue in the German city of Halle. After failing to enter the synagogue, he then opened fire on a passer-by and those in a nearby Turkish Kebab shop, killing two people.

In commemorating the anniversary of the 2019 Halle attack, EUJS & JSUD as part of the “Actions weeks against antisemitism in Germany” will be hosting a virtual, online panel discussion in order to reflect on the horrors of last year and to look forward on the topics of Jewish community protection and on the rising antisemitism and far-right extremism in Europe.

We are very pleased to be hosting what will no doubt be a well-informed discussion on these important topics, with the four panelists taking part coming from a variety of backgrounds, including the top EU official on combating antisemitism, a survivor of the attack, and a practitioner of Jewish life in Germany, an expert of democracy and the rule of law and a leading researcher on far-right extremism;

On the panel:
𝐾𝑎𝑡ℎ𝑎𝑟𝑖𝑛𝑎 𝑣𝑜𝑛 𝑆𝑐ℎ𝑛𝑢𝑟𝑟𝑏𝑒𝑖𝑛
Coordinator on combating antisemitism and fostering Jewish life in the European Commission
𝐺𝑟𝑖𝑠𝑐ℎ𝑎 𝑆𝑡𝑎𝑛𝑗𝑒𝑘
Co-founder and board member at Democ. Zentrum Demokratischer Widerspruch, Director of Communications at the IIBSA – Research & Education on Antisemitism
𝑅𝑒𝑏𝑒𝑐𝑐𝑎 𝐵𝑙𝑎𝑑𝑦
Survivor of the Halle attack, executive Director of Hillel Germany and co-founder of the central project Base BERLIN
𝐷𝑟. 𝑀𝑎𝑡𝑡ℎ𝑖𝑎𝑠 𝑄𝑢𝑒𝑛𝑡
Sociologist and founding director of the Institute for Democracy and Civil Society (Institut für Demokratie und Zivilgesellschaft) in Jena